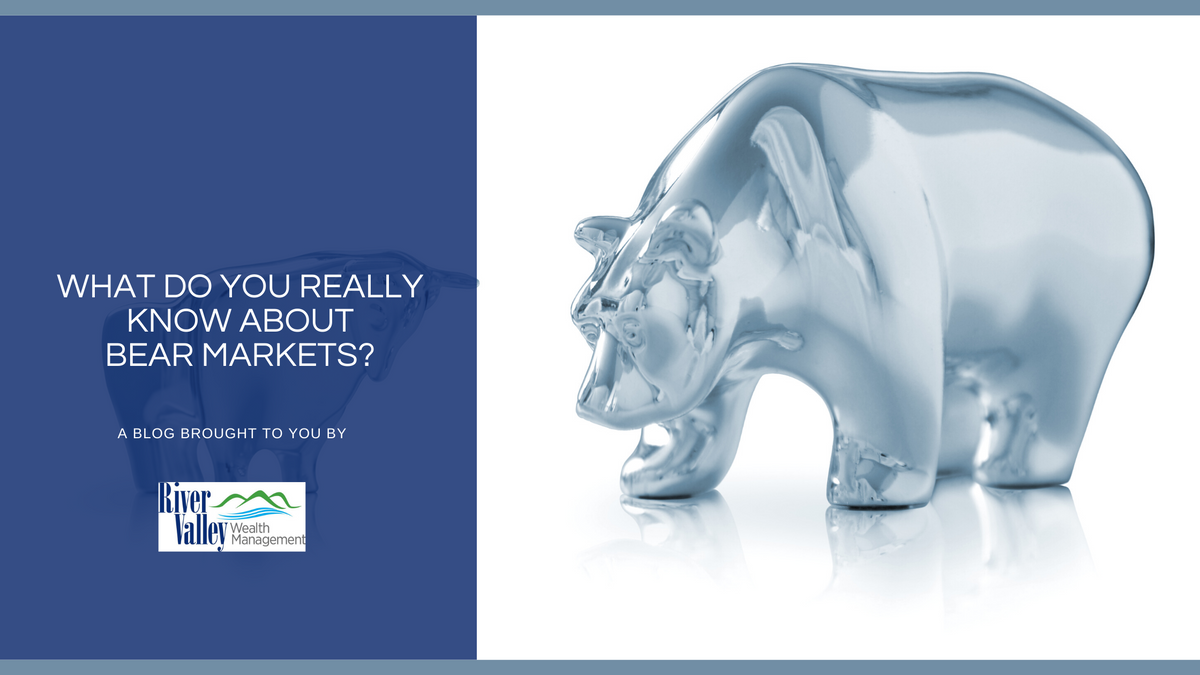 What Do You Really Know About Bear Markets?

A “bear market” occurs when stock prices, in general, are falling, and then widespread pessimism sustains the continued drop in prices.

The stock market becomes a bear market whenever stock prices have fallen over 20% over the course of several months, as seen in market indexes like the S&P 500. Investors lose confidence in the market as they anticipate further losses.

A “bull market”, on the other hand, comes with rising stock prices and increasing investor confidence. Stock prices rise by at least 20% over the course of several months in a bull market.

Looking at history, bear markets are typically shorter than bull markets. A bull market's average duration is about 3 years, while bear markets last on average about 18 months.

The terms, “bear market” and “bull market,” come from the behaviors of these animals: A bull thrust its enemies upward, while a bear prefers to knock foes into the dirt.

It is important to distinguish a bear market from a market correction, which is shorter and involves less of a market decline.

Market corrections are part of the normal ebb and flow of the market. They are short-term trends that typically last less than two months and involve stock market declines of about 10% - not the 20% fall in a bear market.

In a normal bear market, there will of course be days or weeks when prices increase. It is important, however, to distinguish a bear market rally from the beginning of a bull market. In a rally, the stock market post gains for days or even weeks in a row. Investors might be tricked into thinking that a new bull market has begun. However, until stock prices increase by 20%, there is still a bear market.

A recession occurs when the Gross Domestic Product (GDP) declines for two or more quarters in a row. Many of the same factors cause recessions and bear markets, but the stock markets and the economy do not always move together. Usually, however, a bear market and a recession overlap.

The S&P 500 Index was used to define the market for each of the following stock market events.

The depression was preceded by the Great Crash of October, 1929, with price declines of 13% and 12% on successive days. The crash also inaugurated the worst bear market of all time, with stocks dropping 89% through June, 1932. High unemployment lasted through the 1930s.

A weakening economy, high inflation, a tumultuous year of assassinations and riots, and tensions of the Vietnam War influenced the development of a bear market, which accompanied a mild recession.

The 1970s were marked by chronically high inflation.

Stocks also underperformed during the decade, rallying and then fading in value. In 1973, the Arab oil embargo drove up gas prices, sparking double-digit inflation, a recession, and a bear market.

By 1980, the country had faced almost a decade of sustained inflation, along with slow growth. In order to fight this “stagflation,” the Federal Reserve raised interest rates. This rate increase, coupled with a deep recession, led to a relatively shallow bear market lasting 21 months.

Due in large part to the excesses of automated computer trading, the market crashed, falling 22.6% in one day. The resulting bear market lasted only a brief 3 months. The GDP did not fall, so there was no recession.

A rising mortgage delinquency rate spilled over into the credit markets because a variety of financial instruments were tied to home loans.

As a result, the U.S. and other countries enacted large economic stimulus measures. It was accompanied by the “Great Recession.”

The pace with which the bear kicked the bull off of Wall Street was startling, as markets were setting record highs as recently as mid-February 2020. In fact, the speed with which the bear awakened from its 11-year slumber was the fastest in history. Volatility was rampant, the NYSE’s circuit breakers kicked on multiple times and the U.S. government rushed through aid packages worth over $1 trillion.

Bull markets feature investor optimism, but this turns to pessimism and panic during a bear market. Both types of markets are driven by changes in investor attitudes as much as by economic fundamentals.

A bear market is difficult to predict. Falling stock values might just be part of a stock market correction. Rising values might only signal a bear market rally, as opposed to a new bull market.

Investors need to beware of the tendency to overreact to fears of a bear market or thrills of a bull market. Investors tend to tinker with their holdings, often selling after stocks have fallen sharply, instead of buying stocks at low prices (or buying after stocks have risen to unsustainable heights). Similarly, some investors sell stocks before the bear market begins but are then too frightened to return.

Many factors affect the stock market. Be sure to consult your financial professional for specific guidance.

This material was prepared for all advisor use.

This material is for general information only and is not intended to provide specific advice or recommendations for any individual. There is no assurance that the views or strategies discussed are suitable for all investors or will yield positive outcomes. Investing involves risks including possible loss of principal.

References to markets, asset classes, and sectors are generally regarding the corresponding market index. Indexes are unmanaged statistical composites and cannot be invested into directly. Index performance is not indicative of the performance of any investment and do not reflect fees, expenses, or sales charges. All performance referenced is historical and is no guarantee of future results.

Gross Domestic Product (GDP) is the monetary value of all the finished goods and services produced within a country’s borders in a specific time period, though GDP is usually calculated on an annual basis. It includes all of private and public consumption, government outlays, investments and exports less imports that occur within a defined territory

S&P 500 Index is the Standard & Poor’s 500 Index is a capitalization-weighted index of 500 stocks designed to measure the performance of the broad domestic economy through changes in the aggregate market value of 500 stocks representing all major industries.